I was browsing through some homo erectus literature just for the heck of it and I saw this pic as a reproduction of the skull: 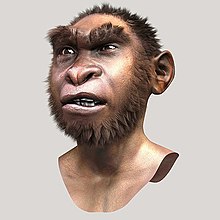 …and the features rang a bell way back in the far recesses of my memory. I have seen that look before, but where? Then it dawned on me…

And while I was searching for a good Hambone pic I saw this: 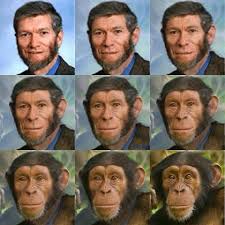 So it was fun, but ground already well plowed 🙂 In case anyone is wondering, Ken Ham is the creationist con man with an ark themed roadside creationist tourist trap in Kentucky. Yee Haw Y’all!

Yep, everyone knows by now about the Lisa Davis fiasco.

And everyone knows about the ongoing Ken Ham fiasco.

I have pretty much let the Lisa Davis thing slide, except for maybe saying in the privacy of my own home a few choice words on her actions. Then I was driving home yesterday and it all changed. There is a motel in town that routinely posts ignorant x-ian nonsense on its sign out front, I had just picked up some pizza and was on the way back home when I saw the sign.

I darn near blew a gasket. To what lengths will x-ians go to to spread their damn lies? Lisa Davis is in jail for being a goddamned dumbass who directly violated a new law laid down by the Supreme Court, and by a local judge who found her in contempt. She is in jail for being an idiot, not for being a x-ian. How people can confuse the circumstances and turn the facts into some martydom complex to suit their purposes is beyond me. But we see that kind of crap a lot. I should be to the point now where I might expect to see this kind of thing. But it sure caught me off guard yesterday.

Nuttin much to say on Ken Ham lately, but he is pretty reliable as a source of disgust/entertainment. I am sure he won’t keep us waiting for long.

While I am at the keyboard I may as well report on a phenomenon I have been witness to. Ever since the shooting in Charleston, and the subsequent confederate flag freak show, there have been a great deal of good ole southern rednecks flying confederate flags all over the place. I mean running up and down the roads with two large confederate flags flying in the back of their pickup trucks. Confederate flags in the windows, serving as curtains. Confederate flags hung from trees in the yard. You get the idea. It seems to me the only tangible result of all this is someone is making a killing selling flags.

I have never seen the confederate flag as a symbol of hate. I suppose there are many who would use it as such. But I have only really seen it as a historical reference, and a good identifier of a true “good ole southern redneck.” As far as it being symbloic of hate, I understand the history, but that doesn’t quite add up as a symbol of hate to me. Until someone actually uses it as one. Then it becomes symbolic of hate as demonstrated by the act. We can say the same thing for many flags. Do we ban them all?

I’d be interested in your take on the subject. Pick one, two, or go for broke.

Back to the founding father quotes this month. This time I have one from Ben Franklin. Franklin an admitted deist, which was common for the day, at least among the more enlightened minds of the time. In this day and age I would liken the deist to the type that figure that a god was responsible for the creation of the universe and such, but has left it unattended to fend for itself, no longer active in the comings and goings of man. I guess that would suffice for Franklins time as well.

I have nothing against a deist, I am happily married to one. I figure deism a step along the path to being able to fully discard the notions of gods eventually. After all tossing the mainstream beliefs of the major religions aside is a huge first step, and one to commend. The mind takes time to free itself of influenced beliefs. These beliefs have to be dealt with in ones own way, and in ones own time frame. With enough time, and enough proper investigation, the notion of gods becomes a silly notion to maintain. There is no valuable evidence to suggest otherwise. Atheism is the last stop on the minds ride to freedom.

“If we look back into history for the character of the present sects in Christianity, we shall find few that have not in their turns been persecutors, and complainers of persecution. The primitive Christians thought persecution extremely wrong in the Pagans, but practiced it on one another. The first Protestants of the Church of England blamed persecution in the Romish Church, but practiced it upon the Puritans. They found it wrong in Bishops, but fell into the practice themselves both here (England) and in New England.”

A fitting quote this month, especially if you are familiar with the “Ark Park” saga at the hands of Ken Ham. Them silly Christians, persecution is apparently a feature they just can’t do without. Neither here in our time, or throughout history.

My source for the founding father quotes here:

I have followed Panda’s Thumb for a long time now. For those of you not familiar with it, this site is front and center to the fight against creationism pseudoscience. The players there are way above my pay grade and education. You have real scientists there who actually know, understand, and do real science, and they have particularly keen insights to the inner workings of the creation science (oxymoron alert!) field of chicanery.

There is an ongoing thread there now:

…which I found very entertaining. The comment section is well worth digging into if you are so inclined. If you check it out, let me know if it was worth the trip 🙂  The good stuff starts late in page 2 of the comments with Mike Elzinga.