I almost pissed around and let this month get by me. I only have a few days left, so let’s get this done 🙂

I found this quote, and it intrigues me, as I have always kind of felt this way. I found out long ago that professionals in the mental health biz had an escape clause for the religious. If it is a widely held delusion it is somehow allright. This has always bothered me. The quote:

While I tend to agree with this quote personally, no one diagnoses the religious as holding a delusional belief. They get a free pass.

So what is a delusion? Here are a few dictionary definitions:  A false belief or opinion.  A false belief that is resistant to reason or confrontation with actual fact. Or simply, the state of being deluded.

Let’s focus on the second one there, “a false belief that is resistant to reason or confrontation with actual fact.” That pretty much accurately describes every religious person I have encountered, or heard about. But as I said the religious get a free pass from being categorized as mentally ill. Why is that? What makes a delusion an acceptable one? I think culture is the answer, but I don’t care for that excuse. Culture, “The arts, beliefs, customs, institutions, and other products of human work and thought considered as a unit, especially with regard to a particular time or social group.” I don’t see anything in there that should assume people can run around believeing all sorts of nonsense, or to freely allow one to believe in things non existant without question.

When I found out that the word delusion does not apply to religion, I thought about that and came up with this notion, it is from memory and not word for word. But here goes…

There’s a guy let’s call him Joe. Joe is Irish. Joe thinks there are leprechauns in his garden. He is always looking around for them, and quite sure they are there. Is this a delusion? I’m not sure a fanciful belief that leprechauns in your garden is a full blown delusion just yet.

Now, Joe’s belief in the leprechauns has grown a bit, to the point where he is actively looking for them. He is looking behind rocks and trees, and constantly peering out his window in hopes of seeing one. Is he deluded yet? I’m not sure but I think we are getting there.

Finally Joe is so sure of the leprechauns he is building traps trying to catch one. He is also talking to his pals at the pub about them. Despite his friends assurances that they do not exist, and the fact that he has never seen or caught one, Joe still believes leprechauns exist, and live in his garden. Is he deluded yet? Yes, I think so. But because he is Irish and the leprechaun tale is part of his particular culture, he gets the free pass from being delusional? I don’t think so.

Somewhere between having a fanciful belief and actually acting upon that belief despite no evidence at all supporting that belief, delusion has crept in. Joe is fucking delusional.  Being Irish is no excuse. The only reason no one will make this diagnosis is probably because of one of two things. Either the clinical professional suffers from the same delusions, or is fearful of the backlash that would be initiated from such a diagnosis. They are either complicit, or chicken shits.

This is my non clinical opinion.

EDIT: I am going to expand on this issue a little bit. I think one could consider my little story about Joe as a simile for 3 separate stages in the progression of a religious person. The first paragraph you could call a likeness to a deist. Someone that believes in an all powefull supernatural being of some sort, but has no affiliation with any denomination or group.

Paragraph two is the same person who has moved on to prayer, and perhaps associating with some denomination or group…

And paragraph three where the person is attending church regularly, following their rituals, and participating in group activities.

Well more of a lousy picture day, I keep saying I gotta get a better camera…

I get to do a lot of driving lately, about 5 hours a day, back and forth to where my wife works. As some of you who have been with me a while already know she has totaled two cars in the last 3 years, and for everyones sake, and the sake of our current car, I have been doing the driving. She is too valuable to our family to risk a third incident. It is hard to find a good one (wife that is), and despite her driving exploits she is a good one 🙂

Anyway first up for your viewing pleasure is this: 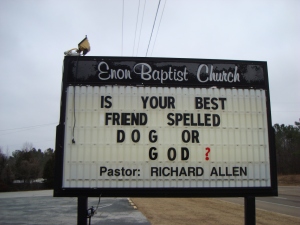 First thing that comes to my mind is, one of these things has empirical evidence of its existence. So I suppose really it depends on who you ask. Next, and the pic quality goes down from here sadly: 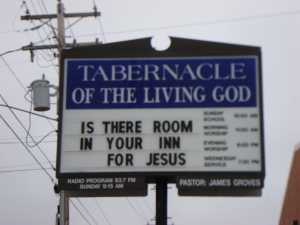 This one, to me sounds like a cheesy come on from a gay Hispanic guy. But again I suppose it depends on who you ask. Next:

I don’t know if you can make out the signage, but it says and I quote exactly as it is spelled “Chose This Day of Whom You Will Serve” You can’t make this shit up folks. I am almost afraid to try and envision what lies inside this abode. Last but not least:

Again too blurred to make out what this says, it was shot through the windshield with the aforementioned crappy camera, it says “I’m Lord of all.” Not sure if this refers to the driver or his invisible friend. Either way it is kinda creepy. These signs should give anyone who reads this blog an idea what it is like living below the Mason Dixon Line.

I will keep my eyes peeled for more signs and things of interest as time goes along.

You guys and gals may have already heard of this.

All I can think of off the top of my head is, You are just now figuring that out?

With the whole of religion being a case of make believe gone haywire, is it any surprise this story is more of the same? Just more stuff for the believers to ignore, along with all that damned evidence they don’t seem to care for. Say isn’t there something or other in the bible about being a big fat liar?

Catching up with world news this morning I see a story about a girl who knows she will die without chemo. Curious I clicked the link to find that due to the girl, and her mothers air headed-ness, they had missed several doctor appointments, the courts have forced this young lady to recieve chemo.

Apparently the mother and child are both convinced they could seek out optional (I suspect some sort of idiotic homeopathic remedies) treatments.

So now this girl is locked in a hospital room recieving chemo treatment against her will, the treatment that has the highest chance of saving her young life.

I am somewhat torn on this issue. I really don’t like the notion that people can be forced to do things against their will. I don’t like that little fact at all. I also kinda feel like if people are really that lacking of cognitive skills they should be allowed to let nature run its course. On the other hand this young girl, obviously influenced by her mothers ignorance is too young really, to properly make this kind of decision on her own.

In the end I am forced to side with the courts on this one. If a parent is so… blonde, that they would let their own child (and in this case influence with bullshit) come to harm, harm that modern medicine can treat, then it is the right thing to do stepping in and doing what needs to be done.

Often in these cases you will see religious reasons cited for resisting treatment. I did not see any hints of that in the article, so this is probably just a case of regular old stupid.

I wish this young gal well, may the treatment work, and you live a long and happy life. I only hope if things work out that the family has enough sense to be grateful. I also hope that when cases like this come to light, for religious reasons or otherwise, the courts manage to step in and save the children from their own parents case of fucking duh!

Be suspect of anything encouraging you to surrender your curiosity