I went out a few days ago and noticed for the first time, no one was home at the nest. I didn’t think much of it, looked again that evening and again no one was home. I got up the next morning and looked again and still no activity. I was beginning to assume there could be only one reason for the nest to have been abandoned, and it could only mean the young did not survive.

However just because I didn’t catch anyone at home, it did not mean the worst case scenario, it was mere coincidence. I have seen them several times of late and got a few pics. I was also able to verify at least one chick in the nest with a binocular observation. I thought I saw a wift of white the day previous but it was fleeting and it was not visible again. Today while I was out observing the nest I definately saw it again. A movement of a fluffy white, very downy looking, little hawk. It was as if it was trying to stand for a moment and just could not maintain, and fell back down.

Once I was just out with binoculars and saw one of the parents hunched over, while it was facing away from me I got the impression from it’s behavior it was stripping meat from some poor critters carcass, though I did not have time to confirm it. I have a pic, though where it looks like a parent standing by with a small piece of critter to feed the young.

Things are really starting to green up. The leaves are coming in quick, and with the wind blowing and trees swaying these leaves are proving to be difficult to get a good shot around. This was a rare finely focused shot, but a bit of green kept it from being a great shot.

Stay tuned. I will keep after these guys until the little one/s are all grown up. 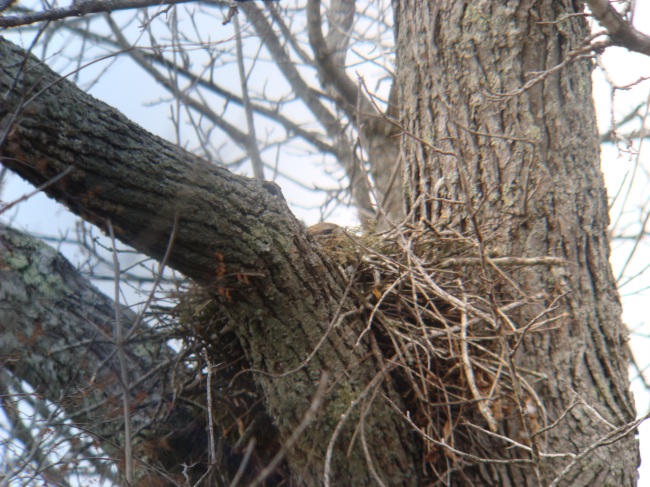 Look closely, there is a hawk eye looking back at you. I have known for some time they were building a nest on my property. Have been keeping an eye on their progress, I did not want to get involved in too much activity, say by making a fuss as to their whereabouts too soon. Now I am fairly sure they have eggs in the nest, as it looks like someone is staying home to incubate. I feel like I can start taking a few pics now, without scaring them off.

I only have one good vantage point where there are not a lot of trees obscuring the nest. It is at least 50-60 yards from the tree, and they are probably at least 60 feet up. For anyone interested in my pic taking gear I am using an 80mm apochromatic refractor (that I already have for astronomy purposes) on a home made alt az mount. I am shooting through 17mm and 13mm Orion Stratus eyepieces (that I also already have for astro purposes) and a 12.1 mp Sony Cybershot camera mounted on a homemade afocal camera eyepiece adapter. Which means the camera is mounted to this gizmo that is attached to the eyepiece in the telescope.

Am still getting used to the gear, so with any luck the pics will get better as I go. I can’t wait till their are little hawks getting fed by the parents! As time and weather permits I will be out getting lots of pics. Oh, Red Tail hawks…I am fairly certain.

…the first time I set the scope up to check out my vanatge point, I zeroed in on the nest and one of the hawks was staring right back at me! Full frontal view…I was like “shit!” I didn’t know anyone was home. I do wish I could get up high enough to look down into the nest, but that would be a chore of astronomical difficulty. Gonna have to do this from the ground. Anyway it should be fun.

Our holy books are harmful and it is irrational to conclude they are anything but manmade.