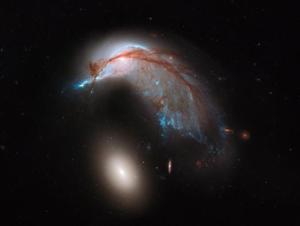 Hubble never ceases to amaze me. This picture of two galaxies, one essentially ripping the other apart, is gorgeous. Never mind the fact that when you look at it it resembles a penguin (NGC 2936), guarding its egg (NGC 2937). This combination of galaxies is known as ARP 142. I am probably an odd sort, as I always like to play “spot the other galaxies” in Hubble pics, I can see at least 10 that I’m pretty sure of, there is probably more, and no I don’t have anything better to do…

What I find intriguing here, is that usually when two galaxies interact there is a mutual warping of structure. In this case, at this point in time, the fuzzy blob galaxy (NGC 2937) appears unperturbed while the penguin (NGC 2936) is being ripped to shreds. The penguin was before this incident, an often seen spiral galaxy. The fuzzy blob was and still is what is known as an elliptical galaxy, that seems unconcerned of its devastating force being exerted upon what once was a beautiful spiral structure.

I wonder why is the NGC 2937 not noticeably distorting? Is its gravitational pull so strong it simply overwhelms the penguin? If that is the case, it must be a hugely dense galaxy. I wonder what an infared pic might reveal here? I also wonder when the penguin gets pulled closer and closer, will the fuzzy blob inevitably begin to distort? I can’t imagine that not being the case. Only time will tell I suppose, and I won’t live long enough to know the answers. In the meantime I can only look on in amazement as the galactical drama unfolds. Reality TV at its best.

Something else I’m curious of in the pic, is the filaments of darker material, that often lines the arms of spiral galaxies. Much of it appears to have been yanked free of the spiral arms, and has formed into the long strands that seemingly are being sucked down the drain, so to speak. As if, during the reshaping process, that matter was distilled out of the arms, and coalesced into the cloud-like strands seen here. Or maybe it is just loose material swept up in this reorganization. I do hope someone with a better grasp of this situation does a full write up, so I can get a better understanding of what is going on.

…and much more needed to satisfy my curiosity. Paging Phil Plait…

EDIT: My favorite professional astronomer Phil Plait,  got around to doing a blog post on this subject. So for more info on the matter (pun?) go here: