The DJ said something about how “they” had discovered some miles long thing crawling along the ocean floor. He even went so far as to say “go look it up on the internet.” So I did. All I found was a very neat hi def sonar image of a round thing on the ocean floor, with a curving trail left behind it. Cool, except for the fact that the very first thing mentioned was how “UFO-ologists” think blah de blah de blah blah. They lost me at UFO-ologist.

Every single link I found on the subject came from what I can only describe a dubious news website. Frankly I do not understand how people can read this crap and immediately think it makes sense.

The pic in question I copied from one of the sites of dubious nature, complete with alien icons in the corners! : 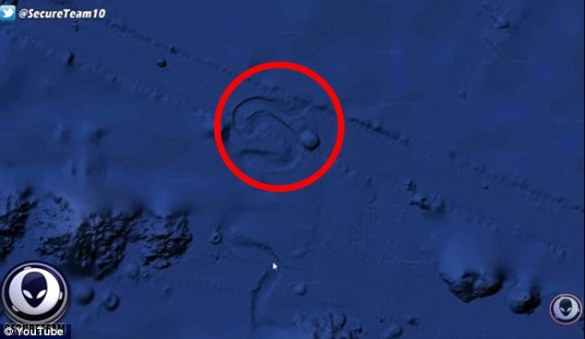 Yep, it appears at first glance this might indicate movement, of an object supposedly miles in length/diameter. First what comes to my mind is the most obvious thing that would be consistently moving in the ocean would be water. And moving water a.k.a. current could easily carve out an unusual trail behind a large object. Unless this object has been repeatedly observed, and shown to have, you know, actually moved, everything else is wild speculation.

Another thing, if you will note the parallel lines moving diagonally across the pic, these lines upon closer examination appear to resemble (but not really) tank tracks. Except they do not look anything like tank tracks, but as you probably know this is the most rational explanation that pops into the head of a UFO-ologist. My understanding is this could indicate a fault line, but let’s not let rationality cloud up a case of people seeing things they want to see.

Lesson of the day, if you see it on the internet, or hear it on the radio, do not automatically assume what you see or hear is real. It might just be something conjured up in the abnormal mind of a UFO-ologist.

When I see this kind of crap I feel like I need to get drunk and say the hell with the human race. A drink anyone?  😉

9 thoughts on “So I Heard On The Radio…”

Thankfully there is no reason to believe a god communicates directives to individuals.